Turkey did not have a punk scene when other countries were writing their own history around 1980s. “I don’t want a punk generation” were the words of Kenan Evren who started the 1980’s Coup D’etat and traumatized every Turkish citizen. It was a period of time when soldiers would enter your house without your permission, to search your library whether you own books related to politics. Many artists or intellectuals continued their life in other places like Europe or America to carry on their work. People started to burn their music records and books so that they would not be arrested by the soldiers. Therefore listening to songs about anarchy would be the last thing a civilian would like to do in Turkey. Thus, Turkey didn’t have a solid punk generation in 1980s when it was booming in other parts of the world.

It is important to understand Turkish political history and Turkish society to comprehend the Turkish punk scene. Like every country, Turkey has a distinct sociology and history that is complex to explain. To keep it simple, I will only talk about the Turkish identity and historical events from 1980s until now, 2019. Starting with Turkish identity, it is a mixture of “Turkishness” and Islam. Turkish identity creates civilians that are born like “soldiers” who are ready to die for their country. There is no respect for individualism nor marginal ideas. Synthesizing Turkishness with Islam creates a stricter border of what ethics and morals should be for Turkish society. It does not stop punks being punks but it invalidates and devalues what punks do. One example would be She Past Away, a goth post-punk band composed in Turkey with all Turkish members. However the members live in Europe, not in their hometown. They had only few shows that actually took place in Turkey. They would rather tour in Europe and the American continent since they believe that their work is more valued by those audiences.

Turkish politics is influential on the Turkish punk scene in a sense that sometimes it prevents the movement from expanding, but sometimes it becomes the punk scene’s material. As I mentioned earlier, the coup prevented Turkish punk from developing but it also motivated people to do something “different”. People started to use political matters in their lyrics, especially injustice.

Because of my age and the inaccessibility of the first punk generation’s first-hand resources, I read Tolga Güldalli’s book, “An Interrupted History of Punk and Underground Resources in Turkey 1978-1999,” which consists of interviews between punk bands, record shops, book shops, zine publishers, audiences and people who affected the Turkish punk scene. The reader should keep in mind that there is a criticism of how first-generation punk was romanticized after this book, and the interview questions sometimes have subjective persuasive style.

Pioneers of Turkish punk include the bands Headbangers, Spinners, Hong Kong Virus and Noisy Mob. They were the first bands that were different from the metal scene in Turkey. Their music usually consisted of direct, vulgar, simple grotesqueness such as “Suratına İşemek İstiyorum” (I wanna piss on your face) by Headbangers. These bands sang in English from time to time in order to avoid police brutality. According to Spinners’ members, their lyrics were seen as a potential threat since they talked about anarchy, antimilitarism, antiracism, antifascism, child molestation and animal rights. They were also connected with many international anarchist organisations, which resulted in them publishing zines in English, not in Turkish.
After this period, punk had a larger audience with more access to punk music from other countries. There were more local bookstores, such as Deniz Kitabevi, and clothing stores, such as by Tampon’s singer Aslı, that were established by punks for punks. There was an established Do it Yourself (DIY) and zine culture in the punk scene. There was more freedom to mention the social problems of Turkey such as corruption, gender discrimination, police brutality. Bands like Rashit even claimed that making punk music was as important as joining political demonstrations. We can see that, after the effects’ of coup got lighter, the new generation had more space to construct a punk scene, along with showing their political awareness. 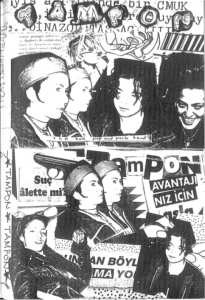 After Gezi Parkı Protests, there were people who felt united against the “power” but people were also affected by the police brutality, economic stagnation and the more despotic side of Erdogan. Along with the bombings that happened nearly each month, detainment increased from 14 (2013) to 14,000 (2019) by just criticizing the government on twitter. A failed coup attempt and arbitrary usage of power granted by the state emergency, arbitrarily firing academics along with the economic crisis resulted in a depressed youth that have no energy to “fight back” anymore. Therefore, if you listen punk to music that is made after that era they are actually humorous songs rather than political. I suggest that it is a coping mechanism for the real “no future” mindset. Another reason why there is less political punk music in the new generation is because of the internet generation, where there is a higher chance of young punks getting arrested because of their political lyrics. Thus, they either find a really clever way to show their distaste on Turkish politics or they auto-censor themselves.

Although these conditions seem pretty bad, it actually contributed to the flourishing of the local punk and synth scene. Turkish music venues were biased and orientalist against the local music, therefore they would mostly book foreign bands, not Turkish bands. Since foreign bands do not go to Turkey, because they think it’s dangerous and because the music venues do not have enough foreign currency to host them, they can only book Turkish bands. This became a huge motivation for Turkish punk bands. Venues like Karga and Nayah, which used to be always welcoming to Turkish punk, became more visible. Bands like Cemiyette Pişiyorum, Asperger, Hedonistic Noise, Kilink, Project Youth and many more were more noticed in the punk scene. In addition to that, regarding the “punk attitude”, synth and goth bands like Jakuzi, Elz and the Cult and Art Diktator continue to influence goth and dark wave subculture in Turkey.

There are collectives such as Pragmata (Goth/Synth), Not Your Turkish Delight (feminist/queer), Apeironcollective (underground) and Klorak (punk rock, specialized in İzmir) for punk and goth scene. Their aim is to collect, empower and strengthen the ties of their specialized music scene. Bant Mag, Rotting Scene and Zero Istanbul are magazines that tried to search and publish entries regarding Turkish subculture. There is an independent record label called Byzantion Records and they record, publish and conduct festivals each year for underground music. Each year Byzantion makes a free festival on an island called Burgazada located in Istanbul. The person behind it used to own a vegan restaurant/cafe called Tight Aggressive, where DIY, punk and avant-garde art used to meet. Unfortunately it was closed down after the economic crisis.

I started to live in Japan when I could have explored the Turkish punk scene in more detail. I had no idea whether Nagoya had a punk scene, since it is uncommon in Turkey to have punk scene in cities smaller than a metropolis. However, I made a friend who showed me the music venues and punk bands in Nagoya. I was shocked how friendly and welcoming Japanese punks are. I felt like Turkish punks try to be intimidating, but that was not the case in Japan, which made me feel welcomed. There are more bands, events and music venues in Nagoya, population of 2 million, compared to Istanbul, population of 15 million. When my friend said “I don’t like Nagoya punk bands”, I thought it was a luxury, because in Istanbul we are begging for diversity in punk. When I asked about this to owner of Byzantion Records, he said Turkish people have no financial situation to consume alternative music, therefore Turkish punk never develops fully.

Of course, comparing Japanese punks to Turkish punks, there are some characteristics that I thought bit different. In Turkey, although the new generation do not sing about politics vulgarly, it is really important to be politically correct or politically aware, punk should be political somewhat. In Japan, my friend said if you want punk to be political, then become a politician, because punk is a part of art. Maybe since politics are made by old ojisans who have elite background, punk in Japan never associated themselves with politics. Furthermore, the age group is really different in Japan compared to Turkey. In Turkey, the average age in the punk scene is around 20s, however in Japan it is usually 30s, even higher.

Also, I would usually observe a punk show in Japan and try to count how many women are there (maybe I am bit obsessive in terms of feminism), and it is usually 10% or less. I do not believe that women have no or less interest in punk, but there shall be a factor that made them hesitate to enter those music venues. Although, I do not think that Japanese punk are bluntly sexist, people could try their best to create a friendlier environment for females in punk like an affirmative action. Of course, same applies for queer people.

Coming from 1980s until now, Turkish punk has been exposed to many difficulties because of the country’s very own faith. Like Kenan Evren said “I do not want a punk generation”, Turkish punk faced dangers of extremist people trying to chase and stab them to end the “punk generation”. But this did not stop the punk scene in Turkey. I bet that there are more elements to explore in other cities such as İzmir and Ankara, but for this entry I have focused on the Istanbul punk scene. I had the chance to explore Nagoya’s punk scene and compare it to my hometown’s scene. As it can be understood from this zine entry, punk is not the same, but it is always a way of resisting the mainstream culture and power that are imposed on us. One thing that I find fundamental in punk scenes is that racism, sexism, homophobia and even speciesism is not something accepted from the community. I believe that it is not good to give a strict definition to punk, however being politically incorrect is against the very nature of punk and should be criticized.